Looking for something that will lift your spirits this summer?  On June 26th, Batkid Begins: The Wish Heard Around the World will premiere in theaters.   The documentary tells the true story of Miles Scott, a childhood cancer survivor from Tulelake, California who became a superhero for a day as thousands of volunteers helped transform San Francisco into Gotham City.

At eighteen months old, Miles had been diagnosed with lymphoblastic leukemia.  In the course of over three years of chemotherapy treatments, Miles developed a special love for superheroes, particularly “Batman.”  After beating the disease, Miles told the Make-A-Wish Foundation that more than anything else, he wanted to be “Batkid.”

Patricia Wilson, the head of the foundation in the Bay Area, put out posts asking for volunteers on social media about a month before the event.  Although she only anticipated a few hundred responses, the project went viral with over 12,000 supporters pledging to be part of the event.

In November of 2013, Miles and his family traveled to San Francisco, where he was told he would get to pick out a Batman costume.  When he arrived in the city, however, he was introduced to an actor playing the role of the superhero.  Later, while watching a local news broadcast in his family’s hotel room, the program was interrupted by San Francisco police chief Greg Suhr calling on Batkid to save the city.  Miles was then escorted from Union Square in a ‘Batmobile,’ rescued a damsel in distress, stopped The Riddler from robbing a bank vault in the financial, and became the subject of a “Gotham City Chronicle” article highlighting his heroic feats.

Miles was awarded a key to the city by San Francisco mayor Ed Lee.  Not long after, President Obama created a video thanking Batkid for his hard work. 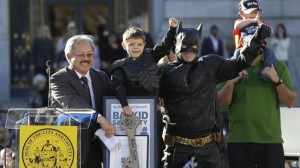