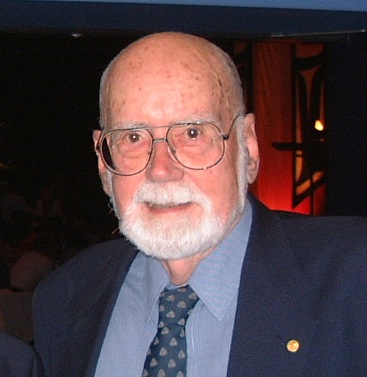 At 3:40 a.m. on an October morning in 1990, Don Thomas woke to the sound of his phone ringing. It was the Novel Prize committee calling to congratulate him – Thomas had won the highest honor in medicine for his work pioneering the bone marrow transplant.

In the early 1950s, Dr. Edward Donnall ‘Don’ Thomas began experimenting with BMTs. Scientists knew that blood cancer originated in the bone marrow and that drugs, like mustard gas, and radiation destroyed bone marrow.  What if the unhealthy marrow could be destroyed and then replaced with healthy marrow? Then we could cure blood cancer.

Dr. Thomas’s first patients were beagles.  He saw that puppies from the same litter could get bone marrow from each other and survive.  So many of them survived that he started bringing them home to his farm outside Seattle.  But, he didn’t know exactly why it worked.  When his team tried it on people, even with donors from other siblings, it didn’t work.  An identical twin was the only donor who would work. With any other donor, either a patient’s immune system attacked the new cells and the cancer returned or the new cells attacked the patient’s own body causing the (at that time) fatal ‘wasting disease,’ known today as graft-vs-host disease.

In 1970, Dr. Thomas was able to successfully transplant a patient with her brother’s marrow.  Tissue-typing (matching the tissue of donors and patients) and the discovery of immune-suppressing drugs that allow the new, healthy bone marrow cells to take over finally made the BMT successful.  Soon, researchers were able to figure out how to match patients with unrelated donors.

The Fred Hutchinson Cancer Research Center in Seattle, Washington is the world’s largest bone marrow transplant center, and part of Dr. Thomas’s legacy.  Today, more than 17,800 people each year need bone marrow transplants and only 7,500 are performed.  Many of the people who need transplants but don’t get them are waiting for someone to be their match so they can have a successful transplant. Help Dr. Thomas’s legacy live on by making sure that 100% of patients needing a transplant can find a match. Get swabbed and save a life.