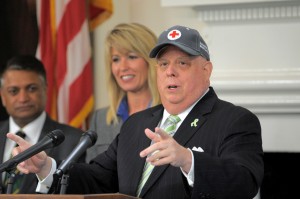 To raise awareness and support for all those affected by the various types of blood cancer, the governor will  host an American Red Cross blood drive, and bone marrow registration drive  in partnership with There Goes My Hero at the State House on September 15.

It has also been announced that the Government House will be lit in red on the day of the drive in support of the Lymphoma Research Foundation’s “Light it Red for Lymphoma” movement.

“In June 2015, Governor Hogan was diagnosed with stage III non-Hodgkin lymphoma. Since then, he has committed to raising awareness and resources to help support those who are fighting all forms of cancer and has been involved in numerous cancer outreach initiatives. The governor has been especially active in campaigns that raise awareness for pediatric cancer and support for childhood cancer patients, such as the Ronald McDonald House and the Cool Kids Campaign. In November 2015, Governor Hogan announced that he was 100% cancer-free and in complete remission” (governor.maryland.gov).

“Showing your support for those affected by cancer, by raising awareness, giving blood, or participating in a bone marrow registry, is critical in helping others who are fighting the battle of their lives,” said Governor Hogan. “My own battle with cancer has shown me firsthand that cancer has no boundaries and affects nearly everyone in some way, and I encourage all Marylanders to join our efforts to support those affected by this terrible disease” (governor.maryland.gov).

Come out and get swabbed to join the National Bone Marrow Registry and potentially become a life saving bone marrow donor!