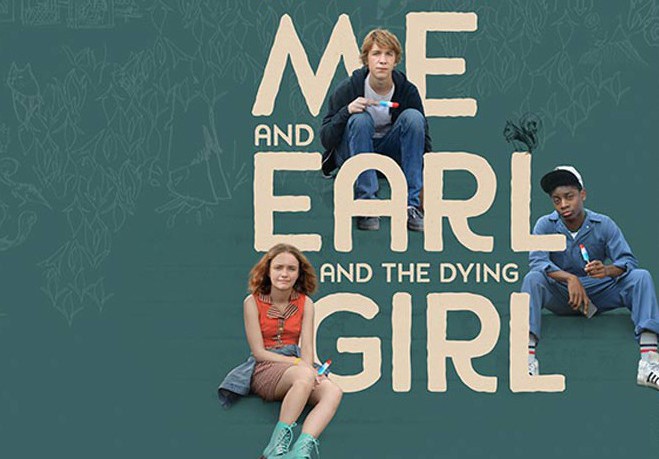 Lately, it seems there have been a lot of films exploring what life might be like for a teenager living with cancer.  As young moviegoers still find themselves tearing up over The Fault in Our Stars, the Sundance Festival hit Me and Earl and the Dying Girl tells another heart wrenching-yet-heartwarming story of love, friendship, the importance of being there for others, and the impact we make on those around us.

Based on the 2011 novel of the same name, Me and Earl, and the Dying Girl focuses on a cynical, 17-year-old misfit named Greg.  A Pittsburgh high school senior, Greg manages to bounce from social group to social group, though he has no true friends other than Earl (who, because he doesn’t like the term “friend,” he calls his “co-worker” despite knowing him since kindergarten). Earl shares Greg’s passion for film and together they spend much of their free time making parodies of their favorite works like Pooping Tom and The Seven Seals.

One day, Greg’s mother informs him that a classmate named Rachel has been diagnosed with leukemia and insists that he visit and befriend her.  Not having any interest in friendships, Greg resents the idea at first.  But upon his mother’s insistence, Greg reluctantly visits her house.  On his visit, he finds that Rachel is equally opposed to the idea, not wanting anyone to “pity” her.  However, as the two begin to talk, they find they share the same sardonic sense of humor and Rachel finds that he adds much to her life.

As their friendship blossoms, Greg and Earl decide to make a film documenting Rachel’s life and journey.  Rather predictably, Rachel and Greg grow closer and begin to develop feelings for one another even though Greg assures the audience that their friendship is “not a romance.”  Still, Rachel makes a significant impact on him.  At her suggestion, he applies to film school in spite of the fact that he never wanted to attend college.  Meanwhile, he and Earl go to great lengths to honor her with their film, getting classmates from all social circles to appear and share words of support for her in the video.

In Me and Earl and the Dying Girl, Greg learns just how fulfilling friendship can be.  Even though caring about someone always opens us up to the possibility of being hurt or the pain of having to say goodbye, the film celebrates how one single person can touch the lives of many and how investing in a relationship- even when it involves great personal sacrifice or forces us to confront our weaknesses- reaps some of life’s richest rewards and teaches us to be more giving and compassionate.  Whether or not one has felt the pain of watching a loved one battle cancer, the lessons Me and Earl and the Dying Girl teaches make the film a must-see this summer.