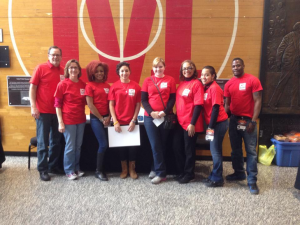 ing 120 seconds a person in the U.S. is diagnosed with a blood cancer. Many people look to the National Bone Marrow Registry when in need of a transplant, but many people are looking at this list and seeing a huge problem.

Minorities are greatly underrepresented on the bone marrow registry. 67% percent of potential donors on the National Bone Marrow registry are Caucasian, and compared to any other race, African Americans are the least likely to find even one potential match; representing only 7% of the national registry. Other minority groups are also struggling to find donors. Hispanics represent 10% of the registry, Asians 7%, Multiracial 4%, American Indian 1% and Hawaiian or Pacific Islander 0.2%. Although the numbers for finding a partial match are slightly higher, bone marrow recipients have a greater chance for survival if a perfect match can be found.

A blood cancer patient’s best chance of finding a donor is with someone that shares similar ancestry. With patients and donors it is important to find matching human leukocyte antigen (HLA) types, which are inherited and typically found in people of the same ethnic background. Patients being able to find donors within the same racial group is crucial, but more and more minority blood cancer patients aren’t having much luck.

My own family was hit with this issue back in 2007, when my older sister Jonell was diagnosed with chronic myeloid leukemia her senior year of college. In the beginning stages, the doctors treated her blood cancer with medication; but once they realized the drugs weren’t working, they began their search on the national registry for a bone marrow donor. Jonell struggled for 5 years as her cancer accelerated before she found a match in 2012. Jonell, whom is mixed race, went 1,825 days on the registry unable to find a match within her same ethnic background because of this lack of diversity; and her story is just one of many.

Many people wonder why minority groups are so underrepresented. Some non-profit organizations are working to increase the numbers of minority donors on the registry, but there are a few issues preventing this from happening. Many minority groups are simply unaware of the need and importance of joining the registry; there are some people who don’t even know it exist at all. There is a major lack of awareness and very few groups that are focused on recruiting minority donors.

Another issue is that many minority groups simply don’t trust the medical system or don’t have access to it. Minority communities are some of the hardest to convince to join the registry and even harder to locate if they are matched. In a study conducted by the University of Pittsburgh, University of Illinois, and the Duke University Medical Center, it was found that in the African American community there is a significant distrust for the medical system due to past years of medical injustices and abuse; such as the Tuskegee Experiment and the multiple incidence at Johns Hopkins, including the university being accused of purposely infecting low income minorities with STD’s for experimental purposes and lead poison testing on African American children; both cases which still have pending lawsuits today. This frame of mind has created a culture that harms many people’s’ right to receive proper health care or to save their own life or the life of another.

So how do we fix these issues? A great way to start is by creating more communication methods to reach minority communities. Using social media platforms is a great way to gain attention and spread awareness about the lack of diversity on the bone marrow registry. Setting up drives or information sessions in churches is another way to inform and educate. It is important that non-profit and charity organizations reach out to higher minority populated areas and show a great presence in their community sporting events, festivals, in HBCU colleges and universities, and even in salons and barber shops in order to utilize locations and voices that are trusted by the minority community. Minority run radio and television shows can also do a lot better to announce recruiting opportunities and spread the urgency and significance of this issue.  As a community we must debunk the bone marrow donor myths and find ways to help minority donors find trust within the medical system. We must step up to help save those in need.

What ideas do you have to raise awareness in your community?