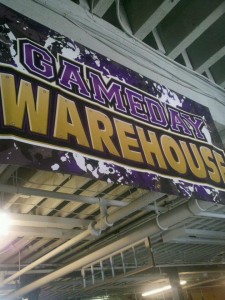 There Goes My Hero Foundation, a Baltimore-based non-profit whose mission is to register bone marrow donors, provide nutritious meals for leukemia patients and their families and to raise money for blood cancer research, registered bone marrow donors at the Gameday Warehouse this Sunday, November 20, 2011, just before the Raven’s home game against division rivals the Cincinnati Bengals.

Although the bone marrow donation procedure is not happening today, Ravens fans at the Gameday Warehouse are in essence committing to donating their bone marrow if a match is found. “Today, like in many other bone marrow drives we have put together, we are simply swabbing the cheek,” said Terry Weigel, the foundation’s Executive Director.  The samples are then sent to a lab where scientists attempt to match donors and blood cancer patients who are in desperate need of a bone marrow transplant.  The foundation will be at the Gameday Warehouse during the tailgating celebrations every Raven’s home game to register bone marrow donors and to continue to spread the word about the importance of the international bone marrow registry.

“It was because of a young 18 year-old German donor that I am here talking to you,” said Erik Sauer, There Goes My Hero founder and the foundation’s board chairman.  “If it wasn’t for her kindness and for the fact that she “got swabbed” I would have not had another chance at life.”

A bone marrow transplant gives leukemia and other blood cancer patients a second chance.  “There is unfortunately a lot of misinformation out there,” Sauer pointed out.  “If you were to donate your bone marrow today it would most likely be like donating blood.  Your blood is collected, spun in a centrifuge–where hematopoietic or blood forming stem cells separate from other blood components–and then returned to you.”  This procedure is known as the Peripheral Blood Stem Cells Donation and it is not a surgical procedure.  Another procedure, known as the Bone Marrow Donation Procedure, is less common.  The Bone Marrow Donation procedure is a surgical procedure and it takes place in a hospital.  The donor is anesthetized so he feels no pain.  During the Bone Marrow Donation doctors use a needle to withdraw liquid marrow from the back of the donor’s pelvic bone. The marrow will replace itself completely within 4 to 6 weeks.

There Goes My Hero urges young people and minorities to “swab a cheek. . .save a life” by joining the bone marrow registry.  “We’re actively recruiting people between the ages of 18 and 55, but it’s especially important to increase the number of young adults and ethnically diverse donors.” said Jonathan Haupt, another recipient of a bone marrow transplant and leukemia survivor who serves on the foundation’s board of directors.  “People from an ethnic minority background are especially needed to join the registry including African-American, American Indian, Asian, Hispanic or Latino and mixed ethnicities” he concluded.

A bone marrow drive will be hosted at the Gameday Warehouse during most Ravens home games and other There Goes My Hero Events, including the upcoming Music for Life Benefit Concert at Towson University on December 9, 2011 from 5PM to 9PM.  For more information, visit https://theregoesmyhero.org/events/music-for-life-benefit-concert/.